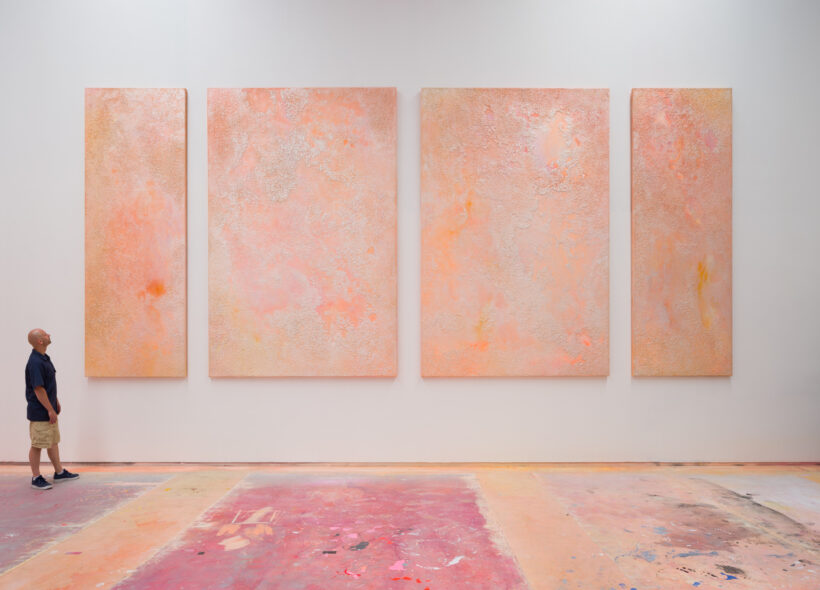 Following a year of creative experimentation and marking a major transition in technique, leading mid-career Melbourne based artist Ash Keating’s new series expands the physical and psychological complexity of his work.

The exhibition includes four very large canvases and a series of eight smaller domestically scaled paintings. These stunning new works have been formed by the application and manipulation of countless layers of media, including pigments, perlite, mica flakes, paint and water. The process of building and paring back has involved an eclectic set of equipment such as seed sprayers, leaf blowers, wire brush, electric sanders, vacuums, and Stanley knives.

Forged over the period of one month at the end of 2020, towards the end of the lengthy COVID-19 lockdown in Melbourne, the works have been designed to be viewed in real life rather than virtually via a screen. Their surfaces hold an intense depth and richness and their appearance changes depending on the light and angle from which they are viewed. The series has a meditative quality that invites slow and reflective viewing. Created as an antidote to isolation and anxiety, the works encourage reconnection, reflection and solace.

Keating has exhibited extensively in galleries and created numerous large-scale, site-responsive art projects in Australia and internationally since 2004. He has undertaken numerous large-scale painting commissions in public spaces, including the National Gallery of Victoria, Melbourne (2013), the Adelaide Festival Centre (2015) and Sydney’s Domain (2018). His works are held in many public and private collections including the NGV, NGA, MCA, AGNSW, MUMA and Artbank.
ashkeating.com